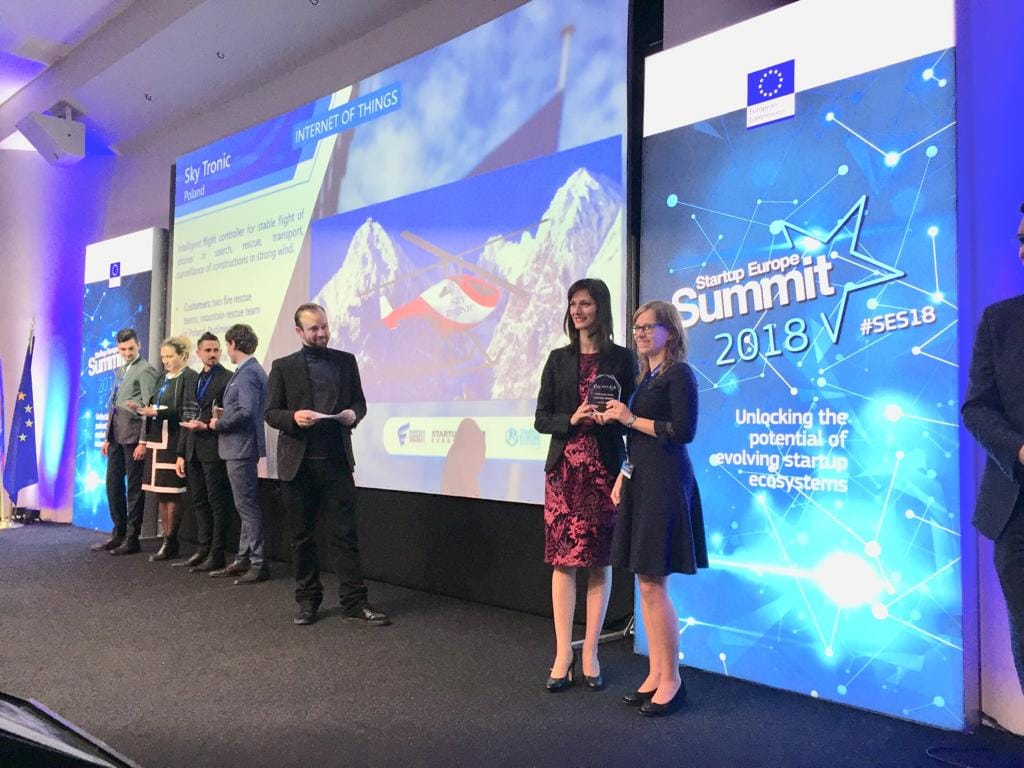 On November 15 Sky Tronic was declared a winner of two Startup European Awards: Best European Startup in Internet of Things category and Justyna Gudaszewska was recognised as Best Female Entepreneur. The awards were handed out by European Commisioner, Mariya Gabriel at Startup Europe Summit in Sofia, Bulgaria. Thank you Finnova and European Commission for appreciating our hard work to launch precise flight controllers for drones and promoting women entrepreneurship.

At the StartUp Europe Awards final in Sofia, Bulgaria

The startup Sky Tronic, by designing and producing novel steering and flight control systems for Unmanned Aerial Vehicles or drones, has improved the precise use of these drones on special missions in difficult terrain and weather conditions.

Sofia, November 15th, 2018. The Polish startup Sky Tronic has been recognised as the best European startup in the IoT category at StartUp Europe Awards (SEUA), an initiative of the European Commission and the Finnova Foundation in collaboration with Startup Europe. Justyna Gudaszewska, SkyTronic cofounder, was recognized as well as Best Female Entrepreneur for StartUp Europe Awards.

After going through several stages and being chosen to represent Poland in this category, Commissioner for Society and Digital Economy Mariya Gabriel handled to Sky Tronic the diploma that accredits them as European winner during the Startup Europe Summit 2018 hold in Sofia, in the presence of Prime Minister of Bulgaria, Boyko Borissov and several European prime ministers and ministers.

In her speech, Commissioner Gabriel congratulated Sky Tronic and the rest of the European winners and encouraged them to continue working hardly as they have been doing until now. “Europe wants to have more like you. More of your passion, dedication, talent and energy. We believe in your dream and you have already showcased that progress is made with small steps, and that to become successful it takes a long nights and serious thinking on how to approach the most challenging topics. You showcased that success can come from anywhere in Europe. And you showcased that in order to succeed you must be bold and brave”, she expressed.

Justyna Gudaszewska, Board Member at Sky Tronic commented: “Being honoured with the extraordinary award in Internet of Things category on behalf of the entire team, especially the authors of fuzzy logic technology from Wroclaw University of Science and Technology who have brought Sky Tronic from a concept to reality to stabilise the flying motorcycle, Hoverbike proves that we are on the right track to launch our precise steering and stabilisation system for producers of drones in life, mountain, fire rescue, monitoring of construction all over the Europe from European Union funds.  Moreover, the recognition as Best Female Entrepreneur is not only an appreciation of my personal hard work but all female entrepreneurs in Poland and Europe following their dreams. I’m grateful that European Commission and Finnova promotes the entrepreneurship regardless of the sex or nationality. Attending the StartUp Europe Awards ceremony at the Inter Expo in Sofia was a great personal experience to me, and besides offered and excellent opportunity for networking and media exposure.”

“StartUp Europe Awards proposes an open innovation methodology through public-private partnerships, “which works to help public entities to find a solution to their local challenges, and also to help startups by testing their innovations on pilots supported with European Union funding” said Juan Manuel Revuelta, director of the StartUp Europe Accelerator at the Finnova Foundation.

Sky Tronic and the other European winners of the StartUp Europe Awards will gain visibility thanks to the Media Partner Alliance, made up of 25 members from Spain, France, Belgium, Latvia, Luxembourg, Italy, Slovenia, Croatia, Cyprus, Ireland, Sweden, Mexico, Norway and Denmark, among others. Startups will also have access to a mentoring programme (in internationalisation, European funds such as the €50,000 to €2.5 million non-reimbursable grant SME Facility, international communication, etc.), through the Finnova Foundation’s StartUp Europe Accelerator, which will enable them to boost their projects and make them more viable worldwide

In order for this site to work properly and in order to evaluate and improve the site we need to store small files (called cookies) on your computer. read more